Menu
Home > All Blog News>MODENA KART CONCLUDES A POSITIVE SEASON IN KZ2 WITH SIMONE CUNATI AND LUIGI DI LORENZO
Are you an Amazon customer? Pay now with address and payment details stored in your Amazon account. 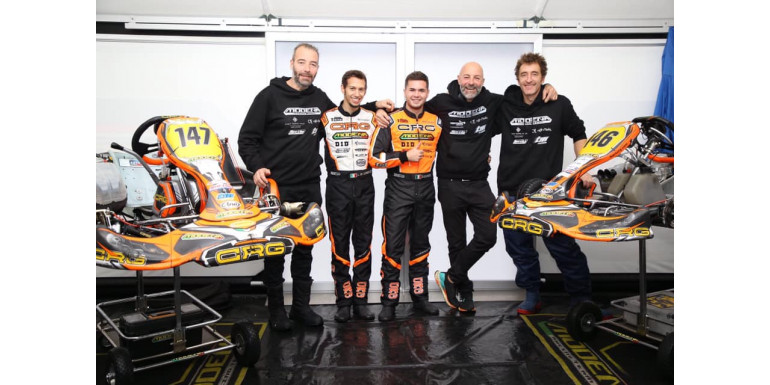 The 48th Trofeo delle Industrie on 3 November held at the South Garda Karting represented the last important race of the season for Modena Kart, which with its two bearers Simoni Cunati and Luigi Di Lorenzo were engaged in KZ2 at the wheel of the CRG chassis with TM Racing engine curated by Gianfranco Galiffa. Also in Lonato both Cunati and Di Lorenzo fought to get a good result, and in fact in the free practice on dry asphalt the two riders were able to stand out, so much so that they hoped for the rest of the weekend. The arrival of rain, at times even very violent, has instead affected the competitiveness of both Cunati and Di Lorenzo, also due to some penalties suffered in the heats due to the position of the non-compliant front spoiler due to some contacts. Di Lorenzo was also forced to the repechage race in order to qualify for the Final, a race that was brilliantly overcome, while Cunati in the Prefinal managed to recover another 7 positions. In the Final both Cunati and Di Lorenzo did their best, and Cunati managed to get back into the top ten despite suffering another penalty, while Di Lorenzo finished 23rd.
The 2019 season for Modena Kart and its two bishops was still positive. Simone Cunati won the Italian title in KZ2 at the end of a good championship, always led to the command, to then conquer an excellent second place in the first round of the European Championship in Wackersdorf and the sixth place overall in the FIA ​​Karting World Championship for the 'International Super Cup of KZ2. For his part, Luigi Di Lorenzo instead made himself known and appreciated for his growing competitiveness, often putting himself in the spotlight among the best of KZ2, as in Siena, where only the bad luck for a technical problem prevented him from winning a probable victory in the second stage of the Italian Championship.