Menu
Home > All Blog News>SIMONE CUNATI AND MODENA KART ITALIAN CHAMPIONS IN KZ2
Are you an Amazon customer? Pay now with address and payment details stored in your Amazon account. 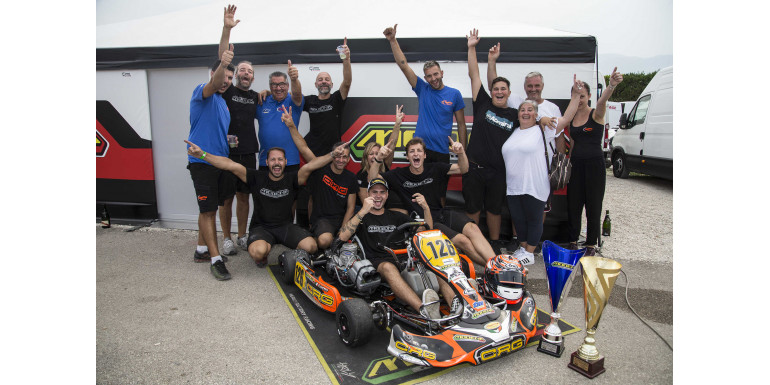 A triumph for Simone Cunati and the Modena Kart team, on CRG TM and the technical assistance of Galiffa Engines, Italian champions at Val Vibrata in the last round of the season in KZ2, with a splendid and irreproachable double in the final of the fifth and decisive round of the Italian ACI Karting Championship.
A clear success for Cunati and Modena Kart, conquered by intelligence in race 1 where he built the victory trying not to make mistakes and to secure the Italian title in advance, and then by force in race 2 with a comeback from the eighth position for the inverted grid of the first 8 positions, where the new Italian champion wanted to give his seal to the Val Vibrata weekend and to the 2019 Italian Championship.
The competitiveness of Simone Cunati and the whole Modena Kart team was very high throughout the weekend, including his team-mate Luigi Di Lorenzo, another excellent protagonist of the Italian Championship and a very fast Val Vibrata test where he had set a promising fifth fastest time absolute. Unfortunately Di Lorenzo was the victim of an accident in the first qualifying heat and his continuation at the event was compromised. He was unable to participate in the second race but managed to present himself at the start of the first final, taking a great 11th place in comeback from the last position. In race 2 Di Lorenzo was the victim of another accident when he had already entered the top ten. A real shame, but it's a fact that Di Lorenzo is increasingly demonstrating excellent competitiveness.
The Italian title won in KZ2 rewarded Simone Cunati and the Modena Kart team, the CRG chassis, and the Tm engine with the preparation of Galiffa Engines, at the end of the Italian season started in Castelletto di Branduzzo with a victory and a third place, continued in Siena with a victory and a fifth place, then in Adria with a double podium, and finally the brace of Val Vibrata. Well done!
Next meeting for Modena Kart and its drivers in Lonato for the World Championship on September 22nd.