Menu
Home > All Blog News>CUNATI WITH MODENA KART HOLDS THE HEAD OF KZ2 RANKING AFTER A DIFFICULT TRIAL IN SARNO IN THE THIRD ROUND OF THE ITALIAN CHAMPIONSHIP
Are you an Amazon customer? Pay now with address and payment details stored in your Amazon account. 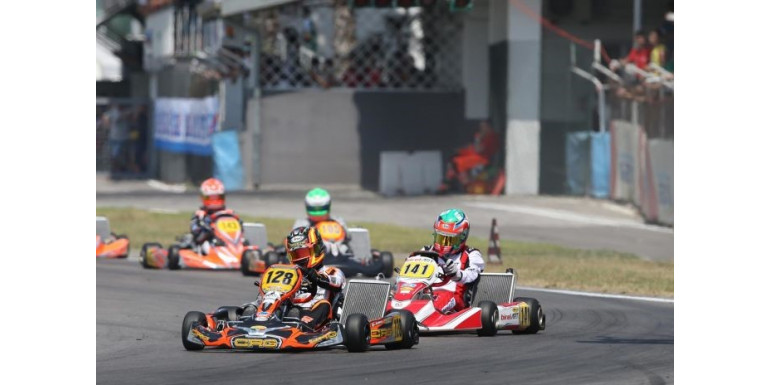 A series of drawbacks, some even difficult to interpret, did not allow the two riders of the Modena Kart team, Simone Cunati and Luigi Di Lorenzo, to enter Sarno. Filed with a little bit of regret the European Championship, with Cunati that after the excellent Wackersdorf race could not express itself in the second round of Sarno, the Modena Kart team returned to Sarno for the third round of the Italian Championship with the aim to strengthen the first position in the provisional championship standings after the successes of Castelletto and Siena. However, Cunati had a difficult and uphill weekend since qualifying, where he took a seventh time that didn't allow him to express himself in the heats. In race-1, from the tenth starting position, Cunati immediately tried to get into the top positions, but a contact with an opponent forced him to retire, while Luigi Di Lorenzo was able to finish 15th. In race 2 Cunati from 25th position engaged in another recovery succeeding this time to finish 11th, useful at least to gain another 3 points in the standings and maintain the leadership with 16 lengths on the pursuers. Behind Cunati, Di Lorenzo finished 12th. The next round of the Italian KZ2 Championship is set for July 28th on the Adria Karting Raceway Circuit, and the categorical objective is to return immediately to the podium.
The second round of the KZN was also held in Sarno. Marco Ruschioni and Claudio Tempesti competed in the Over category with the Modena Kart team, and Francesca Cifola in the Under. In KZN Over Ruschioni and Tempesti concluded a more than positive test, in race-1 Ruschioni finished sixth and Tempesti eighth, while in race-2 Tempesti, after having been in the lead in the first part of the final, he finished in sixth position in front of Ruschioni. In Ruschioni Championship he is fifth, Tempesti seventh.
In the KZN Under positive also the test of Francesca Cifola, qualified among the finalists after the repechage competition ended with an excellent second place. In race-1 Cifola recovered up to 25th position, and then finished 28th in the second final.
The KZN will play the third and final test on 1st September in Val Vibrata, with a coefficient of 1.5 for the championship score.