Menu
Home > All Blog News>KZ2 STRIPED EUROPEAN CHAMPIONSHIP FOR MODENA KART WITH SIMONE CUNATI AND LUIGI DI LORENZO
Are you an Amazon customer? Pay now with address and payment details stored in your Amazon account. 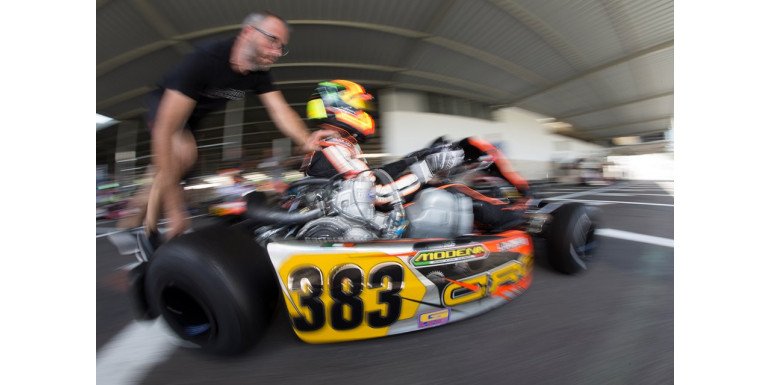 The second and final round of the European KZ2 Championship at the Naples International Circuit of Sarno proved to be an unpredictable weekend, due to the really exaggerated heat that created several problems at several levels, and for the misfortune that was raging on the Modena Kart Team riders in the race on CRG-TM: Simone Cunati, one of the most serious candidates for success, and Luigi Di Lorenzo, increasingly competitive and ready for new satisfactions. In Sarno it was all very difficult, contrary to what happened in the first round of Wackersdorf, where Cunati had almost missed the success with a second place that had launched him among the greatest aspirants to the title. The qualifying tests of Sarno immediately gave an unexpected result for Cunati, who was forced to replace positions in the heats after the 12th time (57.136) in the third series of trials, while Di Lorenzo managed to get a more promising fourth time (56.949 ) in the Series-2. In the heats, despite the bad luck for a retreat due to a technical problem, it was better for Cunati who managed to qualify for the final, while Di Lorenzo was satisfied only with seventh place in one heat, but an accident retreat and three placings beyond the 10th place they did not allow him to enter the final. In the final race, Cunati's comeback was soon interrupted due to an accident during an overtaking, relegating him to the last positions. At the end of the race, he was also challenged for a technical pre-grid intervention that cost him exclusion. "The beginning of the weekend was difficult - said Simone Cunati - but we continued to work to try to bring home a good result. It was the race I cared for most but it went wrong. But no regrets, I'm happy with all the work we've done with the team. Now our concentration will have to turn to the Italian Championship, where we lead the classification after the first two races of Castelletto and Siena, and then to the FIA ​​Karting race of the International Super Cup KZ2 in Lonato on 22 September. I am convinced that we will return to a winning run of results. "